How to play Plumber

Let’s see how the game works, by playing it.

I pay the game to start it. The game starts immediatly, giving me a first pipe to fix. At the left side of the game machine we see that I paid L$10, I must beat the score of 25001 (that’s just a testing score we put to make this demo) in order to win L$20, my current score is 0 and I have still 6 rounds to go after the current round.

At the right side you see near the top of the game machine that I have 16 moves to go this round and that the multiplier is x1. Below that you see the reward plate. At the reward plate I can determine the rewards I’ll earn for fixing the pipe. We get into that a bit further.

The first thing I have to do is fixing the pipe. Without a fixed pipe, no score will be gained this round.

As you see in the picture above, I selected one part, by clicking it. Near the middle of the board, the selected part is highlighted. Now I can select an empty tile on the play board and move that part there, by clicking that tile.

In case I accidentally selected another part than I wanted to select, I can still change the selection, by clicking another part. 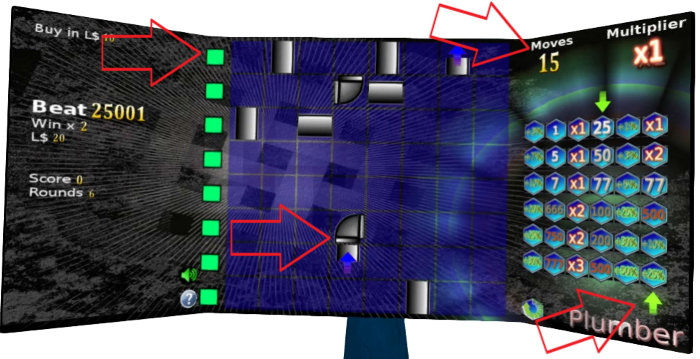 I click the tile where I want to move the part to. Now 4 things happen, you see them marked with a red arrow in the picture above. From left to right:
* The remaining time indicator goes to the maximimum, giving me 16 new seconds for the next move.
* The part is moved to the location where I clicked.
* The amount of remaining moves is decreased by 1.
* One of the green arrows at the reward plate changes position.

You might have expected the first 3 from happening, but what is that green arrow?

Once you completed the pipe you will gain 500 points and each of the arrows will give you a reward. This rewardis picked from the column the arrow points at. The top arrow first and then the bottom arrow.

Let’s ignore the arrows a bit for now. We first have a pipe to complete.

And so we go on, 3 moves later, the board looks as showed below: 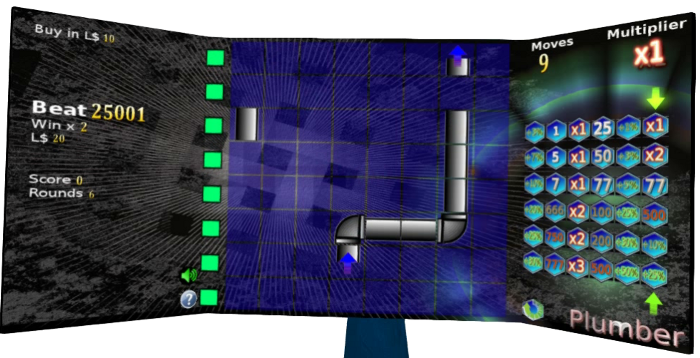 I need to move one more part and the pipe is complete.

Both arrows point now to the last column. I don’t like that. I would prefer other columns. I still have 9 moves left. I can move the last remaining part to a different tile on the board, being not the one tile where it would complete the pipe, and then the arrows will move. Perhaps I got a better deal. With 9 moves left, I’ll have 8 shots. (The last move I need to complete the pipe) 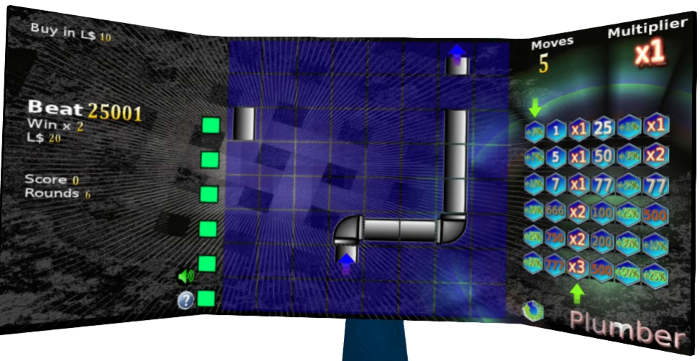 A few clicks on that button later, I find the positions of the arrows a whole lot better.

But, if I make another move, it could also be the bottom arrow moving. Then I have only 3 moves left, so it might not get back at where it is now. Having one arrow at the column giving multipliers is great, doubling or trippling all future score can be very attractive.

I’ll fix the pipe. Let’s see what we get. 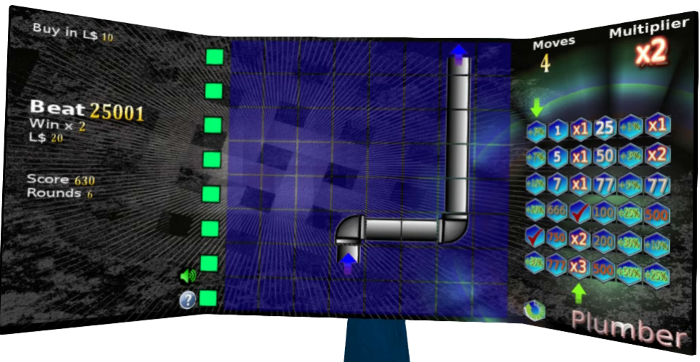 Note that the rewards given are checked out, these won’t be given anymore this game.

It is good to have a strategy aiming at the correct rewards. This game it might be better to try to get no rewards anymore from the column containing multipliers, trying to avoid the 3rd and 6th column. The first column has already a high prize given out, so gets less attractive too.

A good strategy could be : Aiming in the next round or two rounds at the 2nd and 4th column, gaining extra points and then in the following rounds at the 5th column.

But the game is named plumber, so first we have to fix another pipe. The next round start, with a new pipe.

You will notice some of these pipes are rather hard to fix. If you fail, the game will show you the correct solution. Most people get rather handy at it, after trying a few games.

Disclaimer
We wrote this page with caution, verified the details, etc.. Still it is purely informative. In case of an error or mistake, we apologize, but that’s all. You cannot claim any rights on the text above.